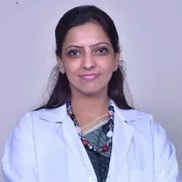 Dr. Pooja Mehta is a gynecologist and obstetrician. She practices in Gurgaon. Dr. Pooja Mehta did her MBBS from ACPM Medical College Dhule, Maharashtra University of Health Sciences, Maharashtra. She has done her DNB in obstetrics and gynecology from St. Stephen's Hospital Delhi in 2005. She underwent Specializaed Advanced Training Course in Gynaecological Endoscopy at Kiel School of Gynecological Endoscopy and Reproductive Medicine, Germany in 2019. Her areas of expertise are gynecology and obstetrics. Dr. Pooja Mehta is the Director and Unit Head of Obstetrics and Gynecology Department at W Pratiksha Hospital, Gurgaon.